skip to main | skip to sidebar


Powhatan Creek Trail is a favorite of mine, and of Brian Taber's.  Yesterday Brian gave me precise directions to this Acadian Flycatcher nest, which I visited today.  Not long after arriving I was able to get this shot.  I look forward to seeing little ones before too long.
~Jim Easton 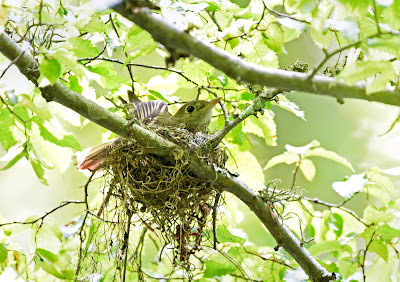 Posted by Coastal Virginia Wildlife Observatory at 11:57 AM

Coming Up in Butterflies, June 2020 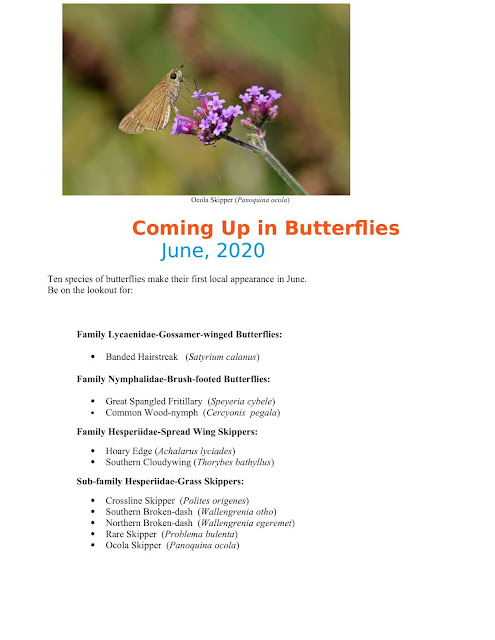 Posted by Coastal Virginia Wildlife Observatory at 1:59 AM

This striking bird, found at Chincoteague NWR on May 4, was a long way from home...Europe and central Asia, wintering in Africa and southern Asia. This photo was taken May 5th. There were other spring records of this migratory species this year from Newfoundland and Nova Scotia.
Brian Taber 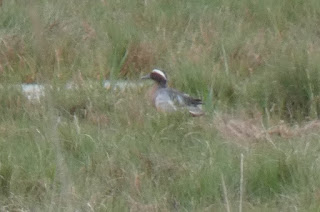 Coming Up in Butterflies, May 2020 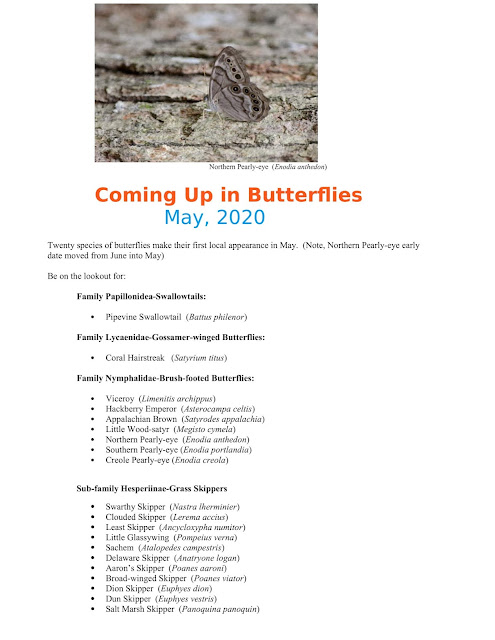 Posted by Coastal Virginia Wildlife Observatory at 7:34 AM

Predation on Powhatan Creek Trail, as observed by Jim Easton

A drama in three acts, as viewed last Thursday on Powhatan Creek Trail:

Act Two: One Barred Owl watches while the other flies toward the action 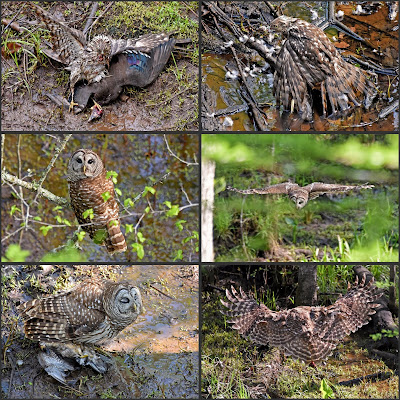 Posted by Coastal Virginia Wildlife Observatory at 9:06 AM

As reported by Jim Easton:

Brian and I watched a Tufted Titmouse in James City County this morning,  gathering fur from a sleeping raccoon's back...titmice typically put fur as the top layer of their moss nests. 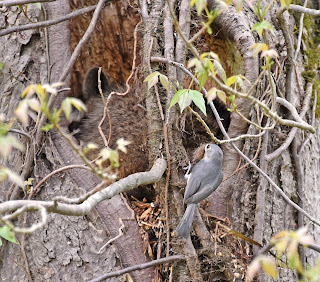 Coming Up in Butterflies, April 2020 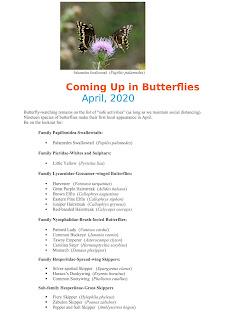 Posted by Coastal Virginia Wildlife Observatory at 8:33 AM

Coming Up in Butterflies, March 2020 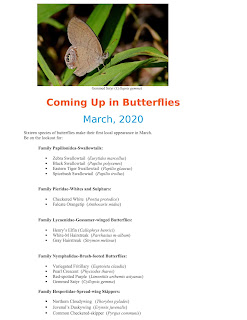 Posted by Coastal Virginia Wildlife Observatory at 5:37 AM

Coming Up in Butterflies, February 2020 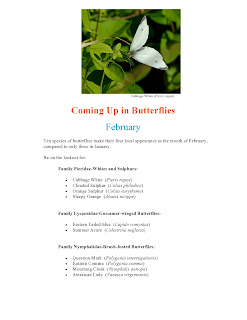 Posted by Coastal Virginia Wildlife Observatory at 8:17 AM 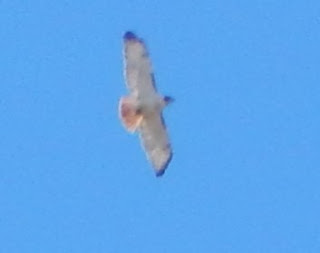 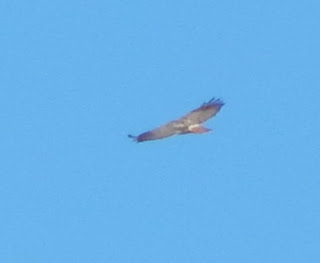 This adult bird was seen on Jan 2 in Portsmouth during the Nansemond River Christmas Count. It's strikingly white below and was even at a distance...the photos are cropped, but not otherwise changed...it really did appear that way...contrasting vividly as it flapped, with the quite dark upperside. There was some rather faint dark barring on the flight feathers that doesn't show up well in the photo. I think field guides are rather inconsistent in describing the varieties of Red-taileds across the continent, but to be fair, the variation is wide, posing challenging identifications.

At first appearing like the western Krider's to me, the dark, though thin patagials, not bleeding more into the wing, look better for the western Fuerte's. The dark on the head, I initially thought was more toward the collar, as can be shown in Krider's, but in the photo it actually appears to be more widespread on the head as in Fuerte's. The throat showed some white.

The underparts are nearly immaculate white and that small smudge on the breast is, I think, either a shadow on the rounded breast or perhaps some fine streaks or...maybe both. The tail appears reddish at the trailing end and whiter near the base.

The dark-ish upperside, however, shows a redder tail throughout, a better mark for Fuerte's and the light scapular spotting is quite restricted....usually more obvious in Krider's.

There don't appear to be weird-looking albino-type white markings to me. I'm not sure if anything rules out Fuerte's...the belly, patagials and head look pretty good, but I would appreciate any comments sent to me directly at   taberzz@aol.com


Posted by Coastal Virginia Wildlife Observatory at 8:32 AM

I've posted a series of photos of an interesting thrasher here in Williamsburg today and yesterday. Looking quite like a Brown Thrasher at first glance, the bird also exhibits several features which field guides and other resources point out as field marks for Long-billed: undertail steaking, whitish underparts coloration, very short primary projection, orange eye, grayish face, grayish in upper back and darker brownish coloration throughout upperparts. The photos highlight all of these features.

Particularly intriguing to me is the undertail streaking, pointed out in Pyle's Identification Guide for banders as a difference between Brown and Long-billed. Pyle also illustrates primary projection for both species, with Long-billed being much shorter. The bird here has very short projection, but is molting on the tail and primaries still growing as well.

The underparts coloration is white rather than buffy, the streaking very dark, the upper back shows grayish feathering mixed in, the face is quite grayish and the eye looks orange-ish instead of clear yellow.

The bill is slightly curved and hooked above and rather straight and pale-colored below, though resources indicate much variation.

Of course, there are individual and regional differences among birds, though I've not noticed a bird with this suite of features previously. I assume this is a hatch-year bird.

Comments by banders and other thrasher folks are welcome    taberzz@aol.com 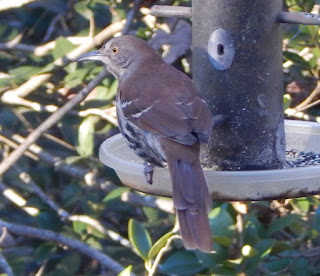 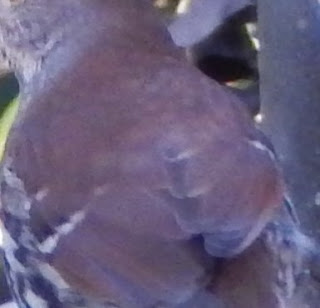 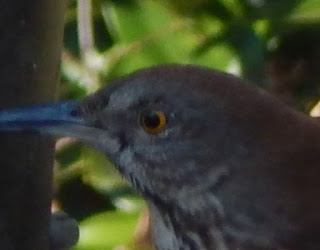 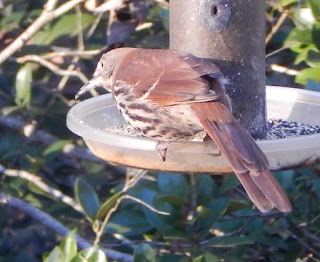 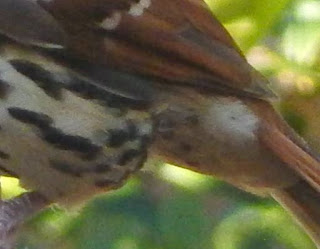 Wrap Up and Season Highlights

There were plenty of interesting sightings during the last couple of weeks of the hawkwatch season at Kiptopeke. On multiple mornings, thousands of American Robins were seen migrating past the platform. Large numbers of Red-winged Blackbirds, Common Grackles, and Brown-headed Cowbirds were also seen. These spectacular movements are always fun to witness, usually beginning at around sunrise and lasting for several hours. Other recent passerine highlights have included a Snow Bunting on November 23, a few Rusty Blackbirds here and there, and a recent increase in American Goldfinches (with a high count of 156 birds on November 29). Still, there were almost no Purple Finches this season, and no Red-breasted Nuthatches. Perhaps next year will be better for these species at Kiptopeke.

Many Turkey Vultures and some Black Vultures were also seen migrating in large numbers during the latter half of November. We do not keep official counts of vulture numbers here at Kiptopeke, since the birds have a strong tendency to move up and down the peninsula before finally crossing the bay. However, my highest informal tally of the season was a total of 764 Turkey Vultures on November 29 (only southbound birds were counted). On November 23, I enjoyed watching four Turkey Vultures land on the t-pole together. There was some shuffling around that occurred as the vultures each worked to claim their favorite sunning spot. It is thought that Turkey Vultures sun themselves with wings outstretched in order to warm up in the morning and to kill parasites. 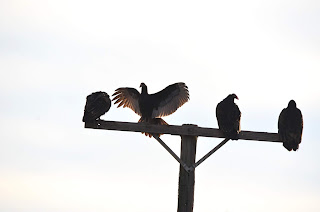 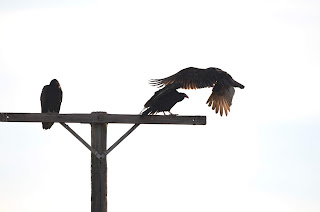 We continued to observe Bald Eagles towards the end of the season, with an amazing grand total record of 710 birds. There was a strong flight of 22 Bald Eagles on November 29. These birds are an incredible conservation success story, and populations have recovered very well since the ban of DDT. One adult was seen carrying nesting material during the last few days of the season.

We continued to observe some decent flights of Red-tailed Hawks towards the end of the season. However, red-tail numbers have been going down in recent years at many hawkwatch sites in eastern North America. The 2019 grand total of 498 red-tails is much lower than counts from decades ago, when season totals of over 2,000 birds sometimes occurred. Research suggests that this is due to birds staying up north for the winter rather than migrating southwards. While many hawkwatch sites have reported declining red-tail numbers, winter bird surveys have reported increased numbers of red-tails. This is just one example of climate change affecting migration patterns, which could result in negative impacts on northern prey populations during the winter months. We had a number of completely overcast days during the last two weeks of the season, which surely affected late season buteo numbers. Buteos are soaring hawks with a preference for conditions with at least some blue sky, so that they can rise up on thermals and save energy during migration. Some red-tails and Red-shouldered Hawks may have been skirting around Kiptopeke and favoring sunnier areas this year.

A few accipiters were still trickling through towards the end of the season. About half as many Cooper's Hawks as Sharp-shinned Hawks passed by the platform this fall, which is a quite high ratio compared to decades ago. While Sharp-shinned Hawk numbers were still low this year, at least the total of 4,451 birds was much higher than each of the past two seasons (2,273 in 2017 and 2,708 in 2018). Similarly to red-tails, data suggest that many of these birds are staying up north during the winter.